Compared to the last Austria journal entry. This ones going to be more of a what we got up to, chatty post. So grab a cuppa, and lets begin…

As I said before, we woke at 4am and set off to London Stansted airprot. Despite how early it was, the place was alive and bustling. But checking in and getting through security was swift and relatively easy. I’ve not done the airport business much so I still get a bit mind boggled, and I was rather tired. And at 7:10am we hopped on a Ryanair plane and set off to Salzburg airport We flew during the sunrise which was kind of amazing. 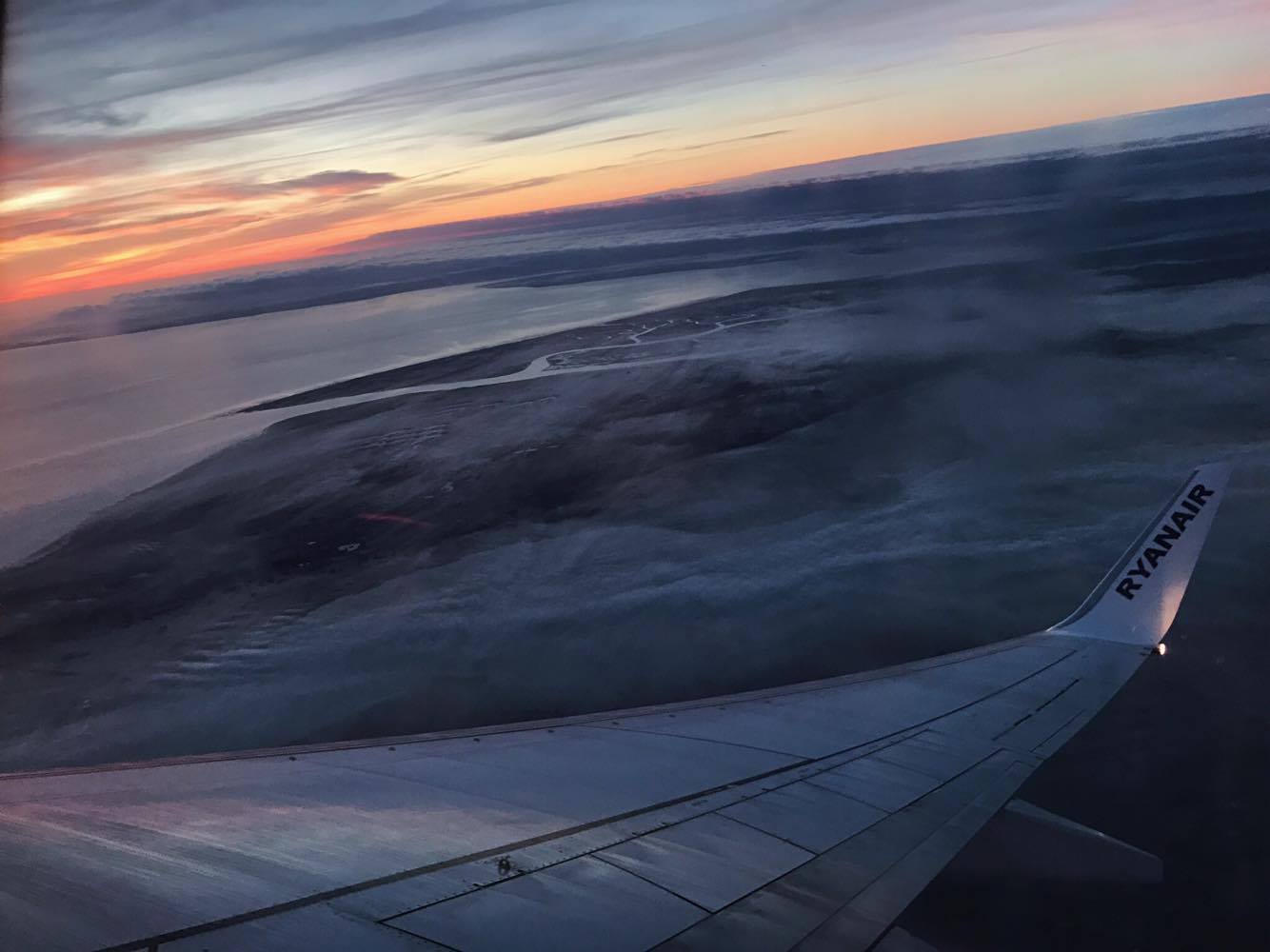 And at around 9:30am we got off the plane, greeted by the bitter cold air and beautiful mountains surrounding Salzburg, our very tired selves certainly woke up a little bit. We then had the challenge of getting more central, where we were staying. We knew we needed to get a bus, but as to which one? No clue. However after 20 minutes of walking around and using airport wifi, we hopped on a bus and made our way into the centre, but as to where to stop? No clue. Our German wasn’t great.

Yet we made it! And finally, we got to our hotel (if you’re wondering, we stayed at Hotel Vier Jahreszeiten and I highly recommend) checked in early and settled in. This was very much what the first day consisted of, getting used to our surroundings. The staff kindly gave us a map and marked out the places to go, so after a rest and freshen up we took a walk and explored, and we were hungry so went on a mission to find a coffee shop – something Austria is well known for.

We looked around all the alluring old buildings and strolled through Meribel Palace gardens, looking towards more of the town and castle on the cliff edge. 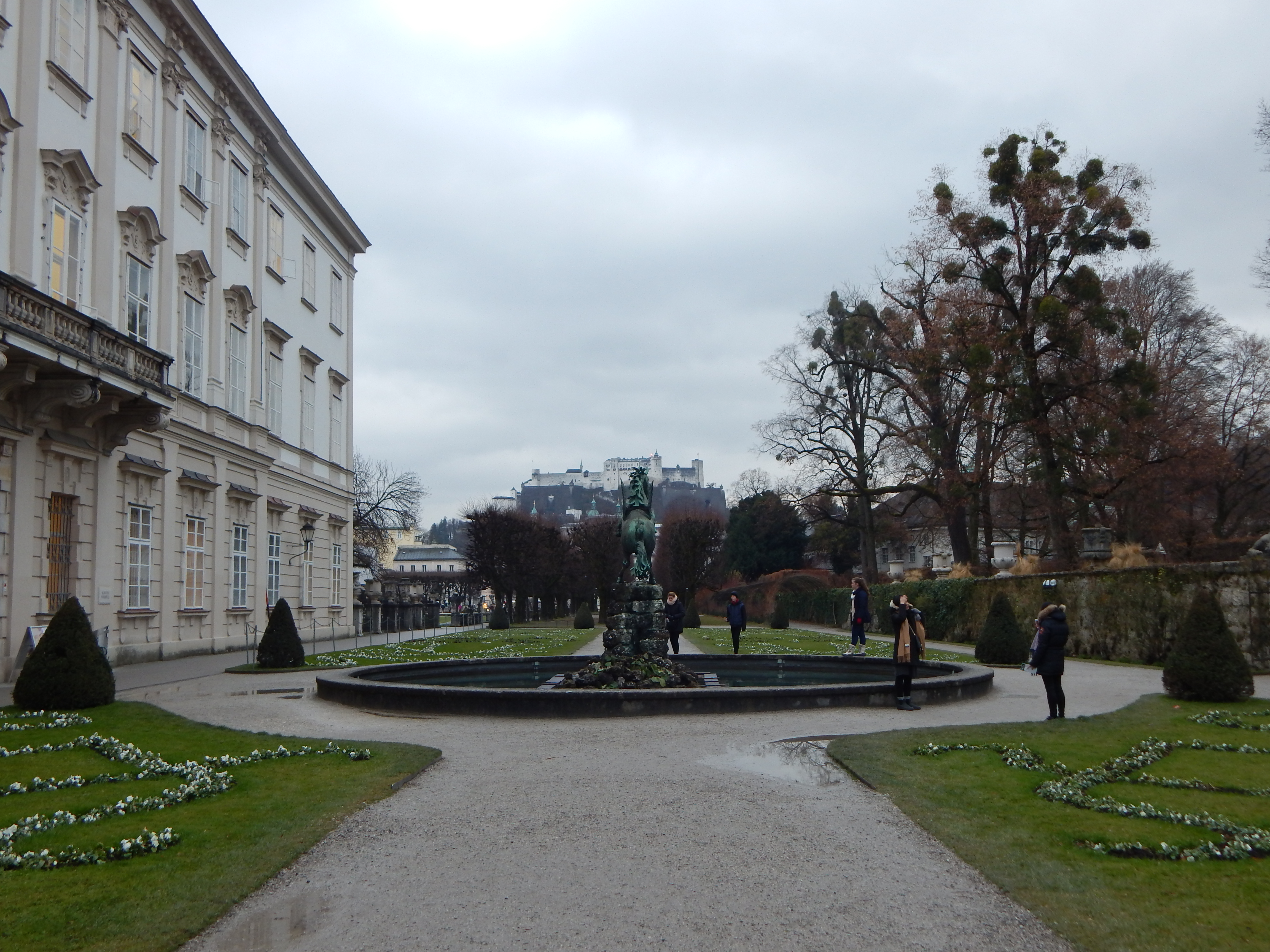 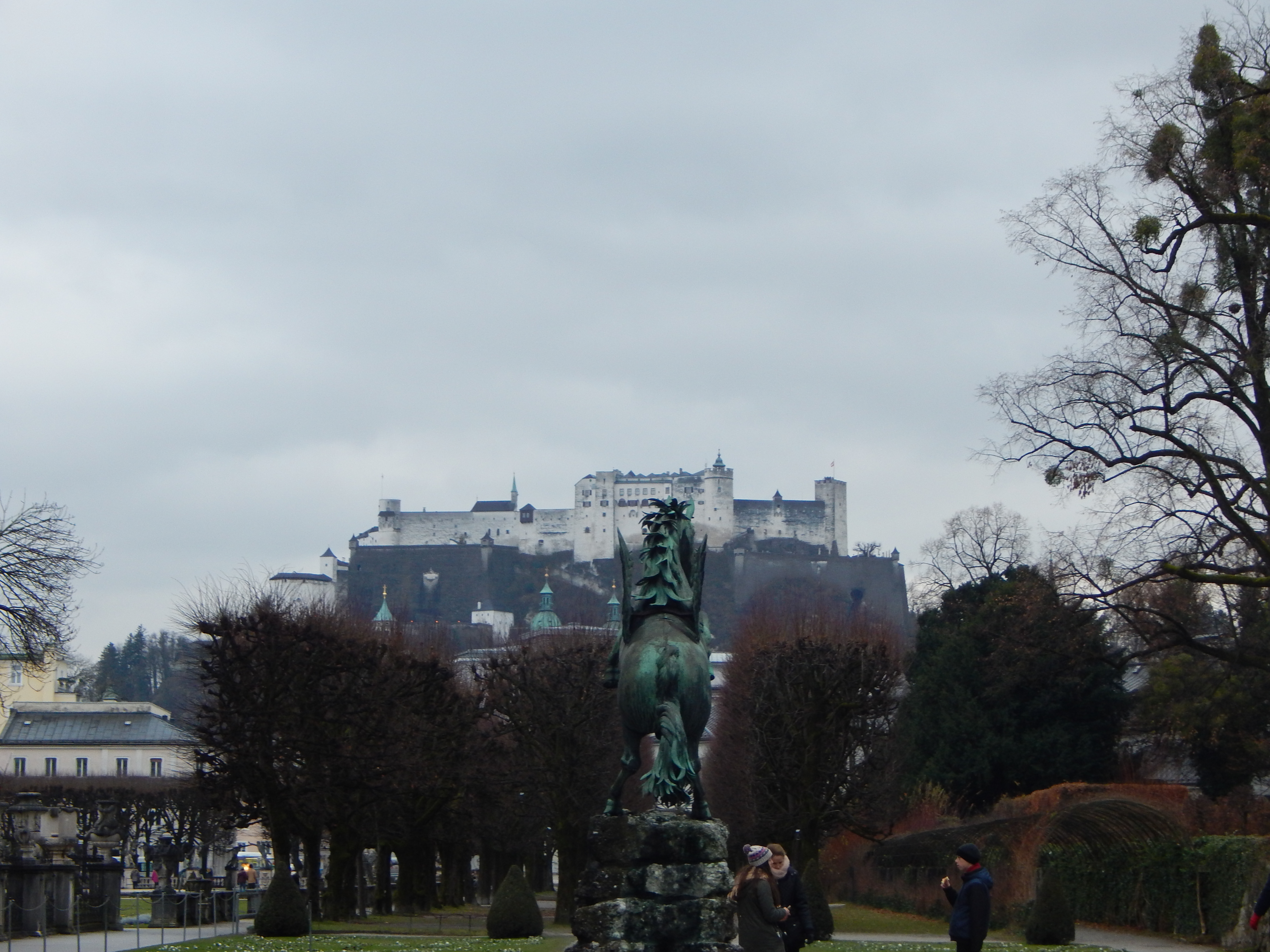 Nothing much happened throughout that day apart from exploring the town. And then going for a meal at a small Italian restaurant next door to our hotel. There wasn’t much in the way of traditional eating places, their signature food was very much meat and cheese.

The second day we invested in the Salzburg card. Which you can buy for 24, 48 or 72 hours and basically gets you free on all public transport and into most attractions. This already proved its worth when we went to go to take a tram up the cliff to the castle. The queue was out the door, and tickets were about 10 Euros. We didn’t have to pay and skipped the queue. That’s what we spent most of the day doing, going round the museum and sights up there, and admiring the views of the city and mountains. 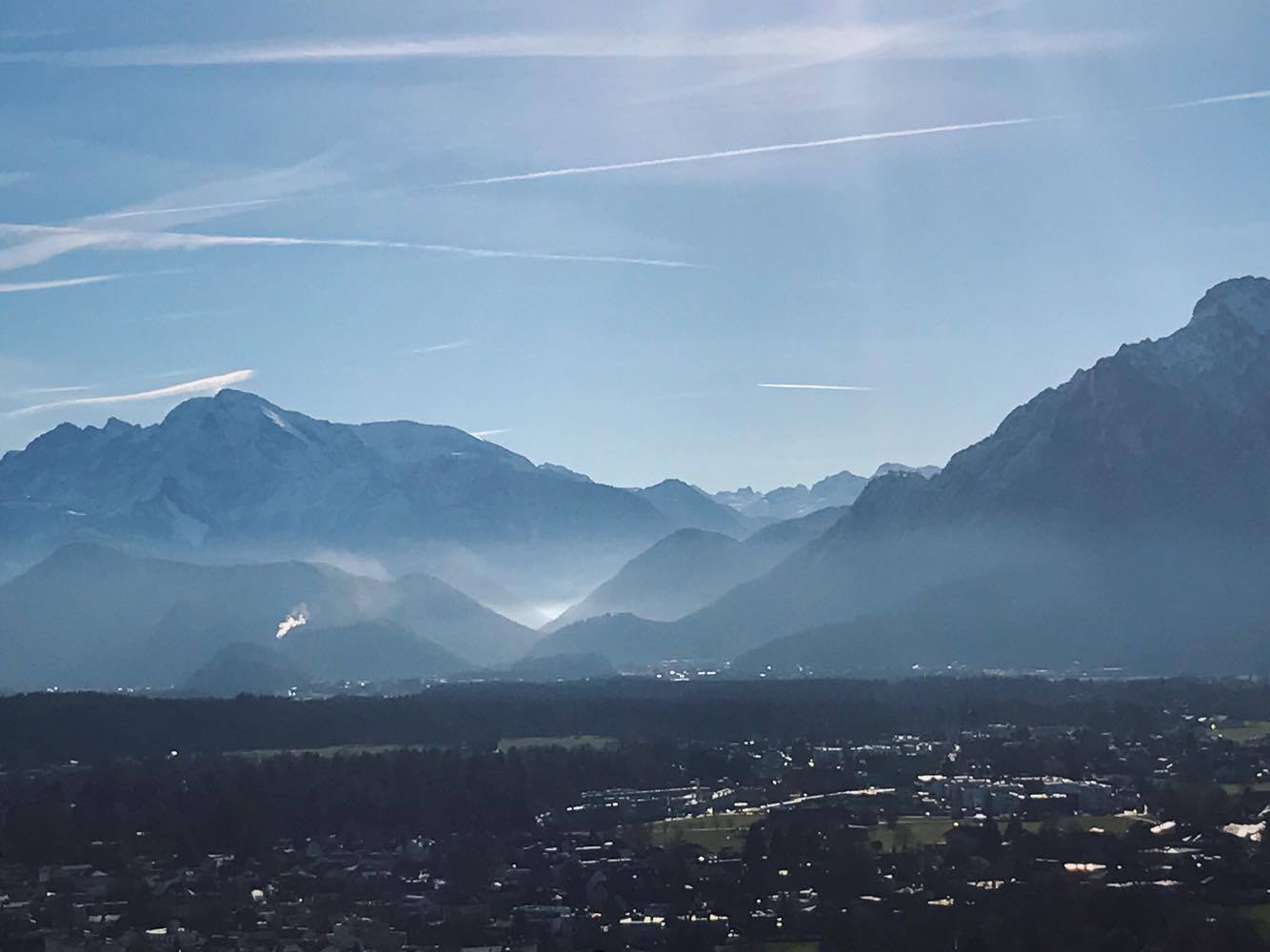 We then explored more of the town, there was so many little nooks and crannies that just make this place so much more compelling. We then made our way into a cathedral. I don’t know about you but I love cathedrals and the imbue of history and culture it brings. There’s this classic sentiment. 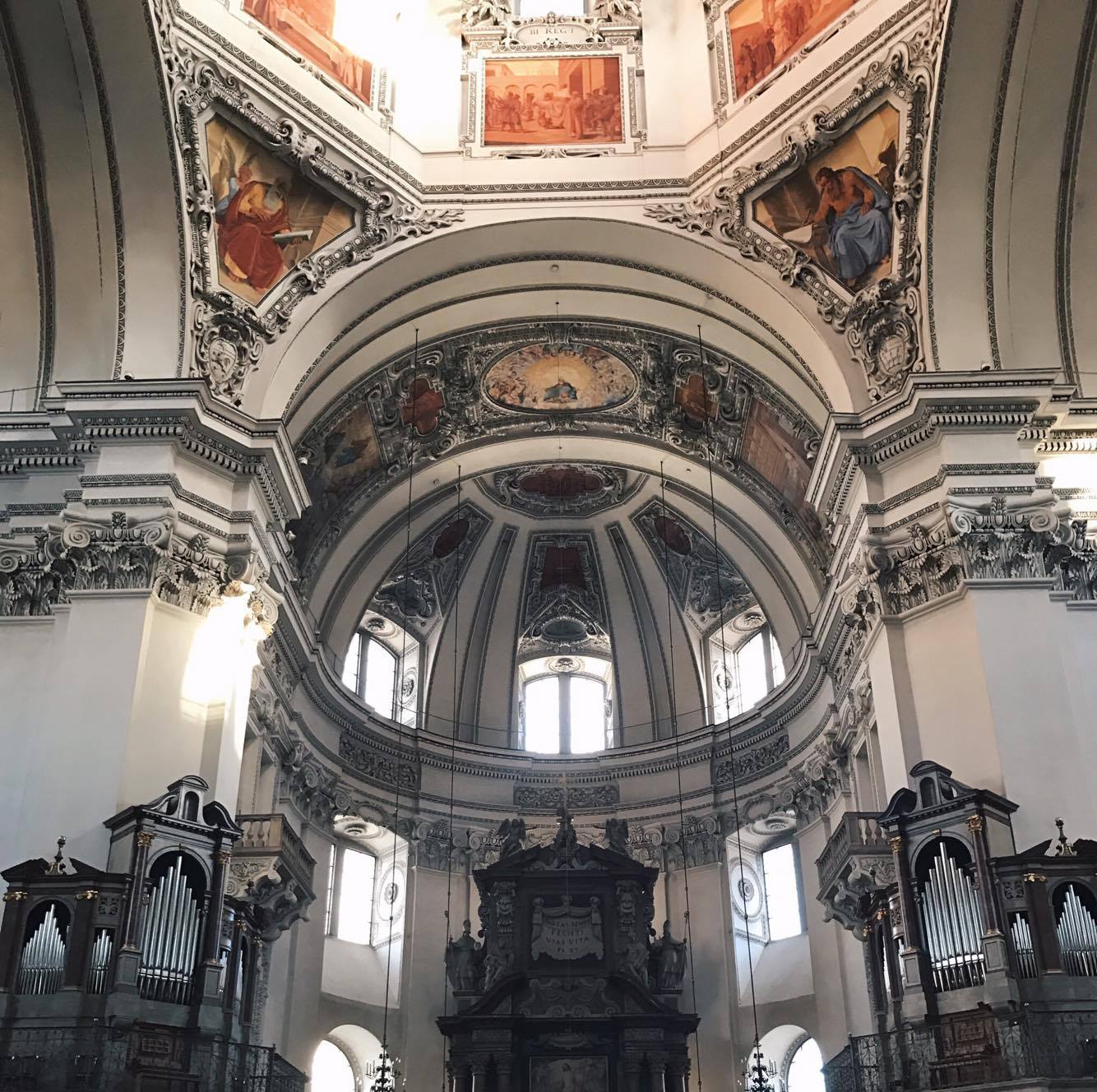 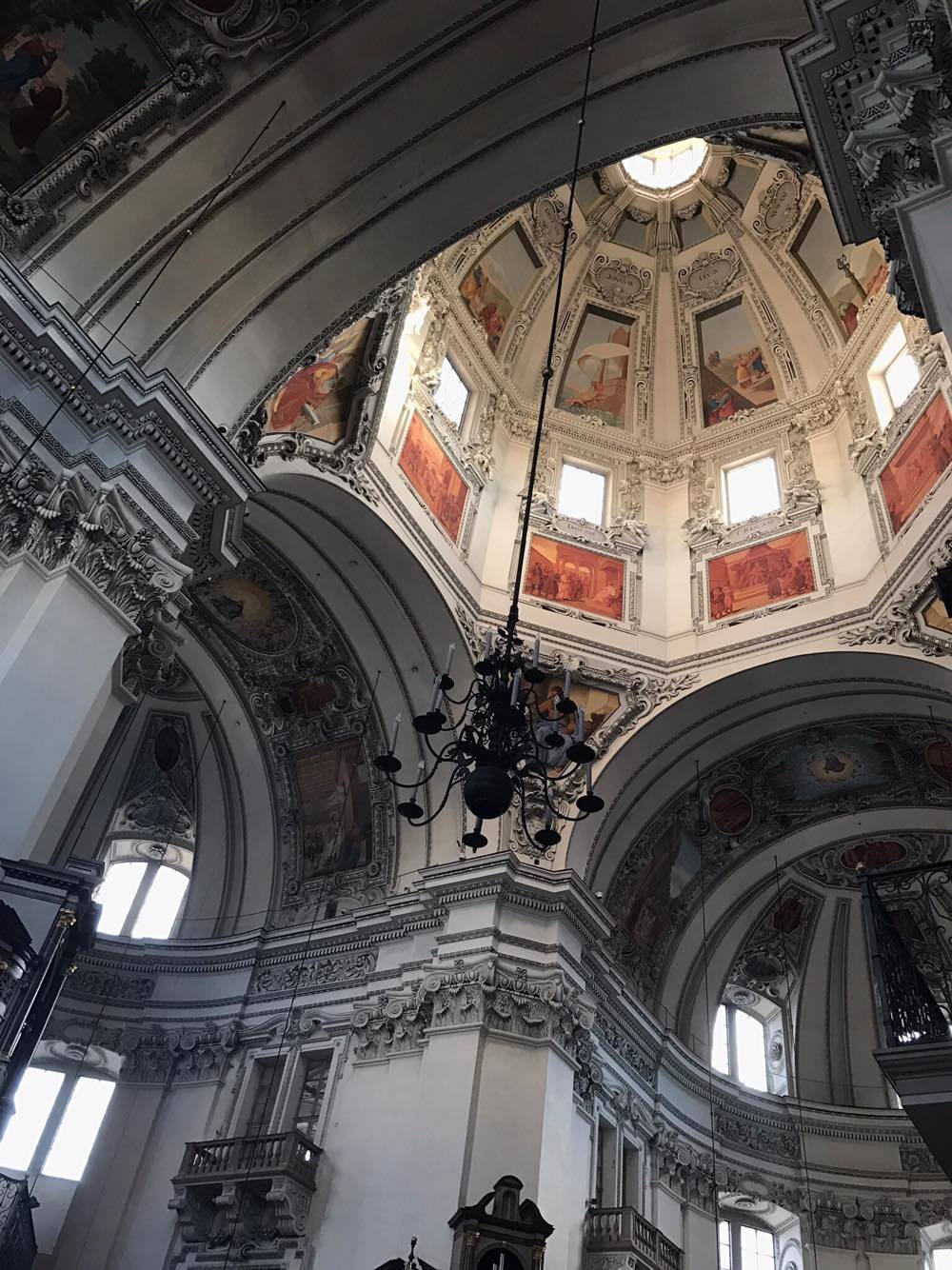 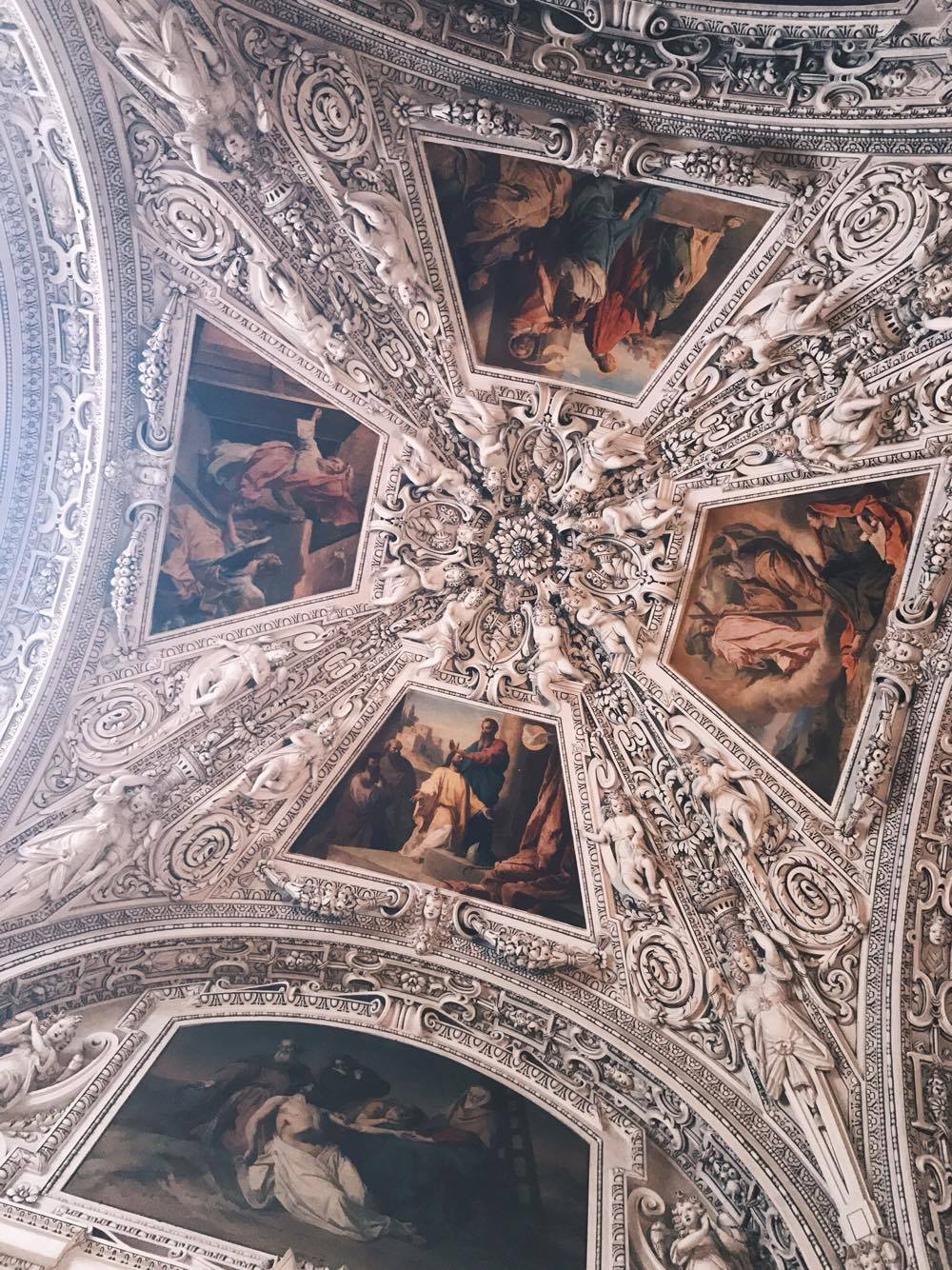 We then found ourselves in the Salzburg museum. Well, thats after accidentally walking the wrong way into the periscope museum. With only an hour and a half left until it closed we were pretty much the only ones there, and quickly but calmly strolled around looking as all the art work (and having a giggle at some too). The art and culture was very versatile, classic and sophisticated but also quirky. 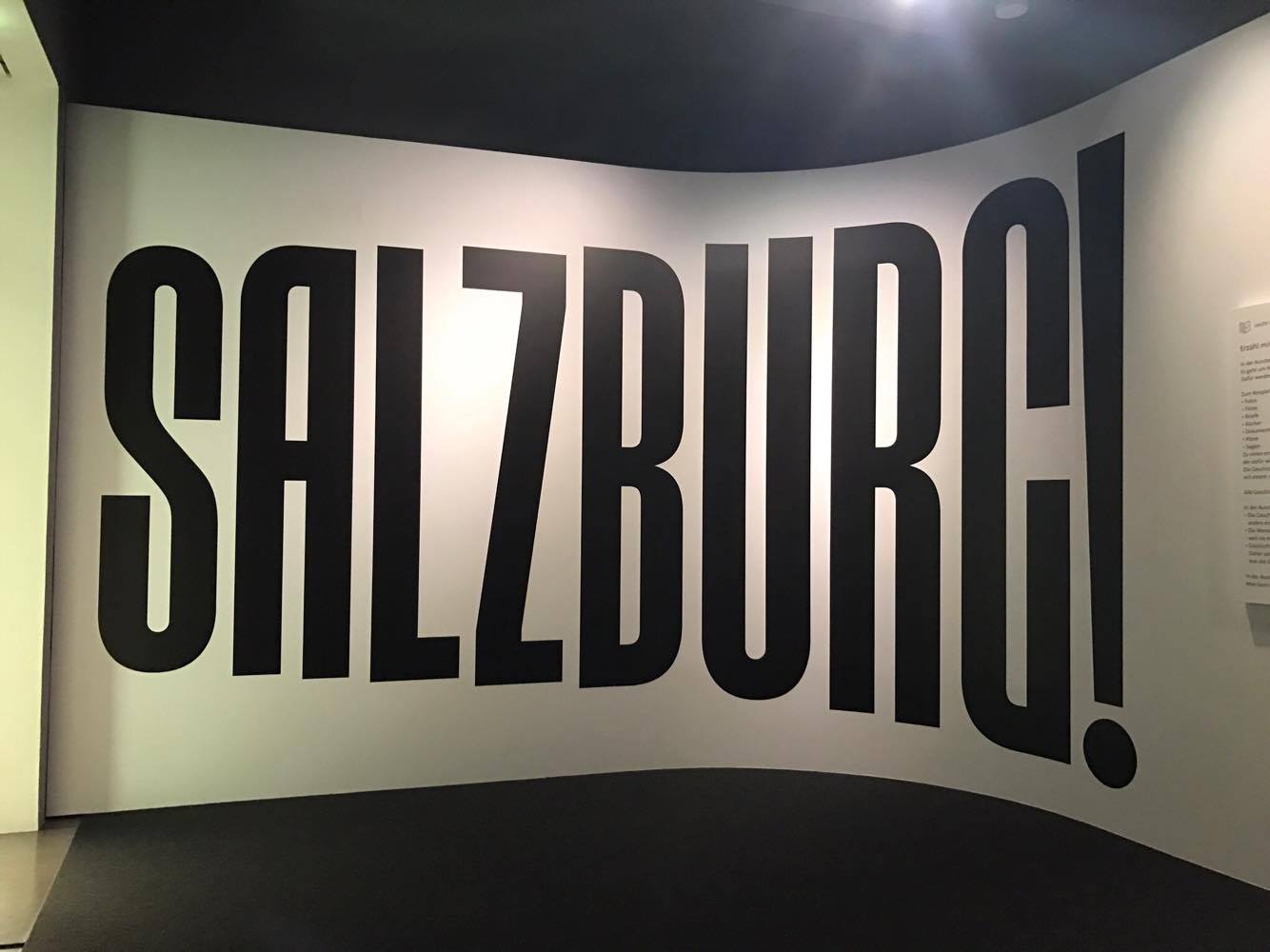 The rest of the day was full of slumber and nothing exciting. Food, wine and nibbles at the hotel, and sleep.

Wednesday, we had, what we thought would be a shopping day. We knew there was a designer outlet just outside the centre. And when in Salzburg, obviously the thing to do is go to the exact same designer outlet as the one 30 minutes away from my house. We were slightly disappointed however, there wasn’t much so after a 10 minute walk around and a trip into Nike we headed back and had more of a ‘chilled’ day walking around the famous shopping streets and scuttling Christmas markets. Drinking some glühwein and eating very large pretzels. And then, after some rather strong drinks we gradually made our way back and called it a night.

Thursday, our last day. We woke at 6am, some a bit reluctantly but we did it. And then went to the lock bridge where, we thought there may be a sunrise. There wasn’t really, but an amazing dusky view. 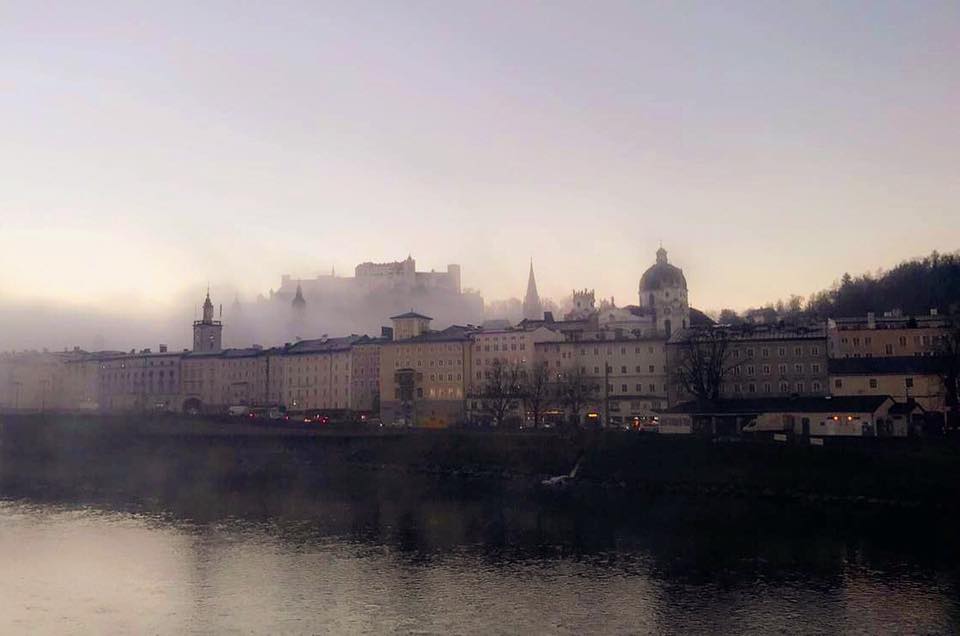 After waiting around for somewhere to open so we could get some breakfast. We ate a rather large breakfast ready for a hectic last day. We then went back to the hotel and layered up. Then we were off on a 4o minute bus journey to a village outside Salzburg and took a cable cart up into the mountains. Grodig to be precise. It was a little later in the day and the last cable cart down was at 4:00 so we had about an hour to walk around. As neither of us wanted to climb down a mountain. But it was so, so worth it because, well, just look at these views. 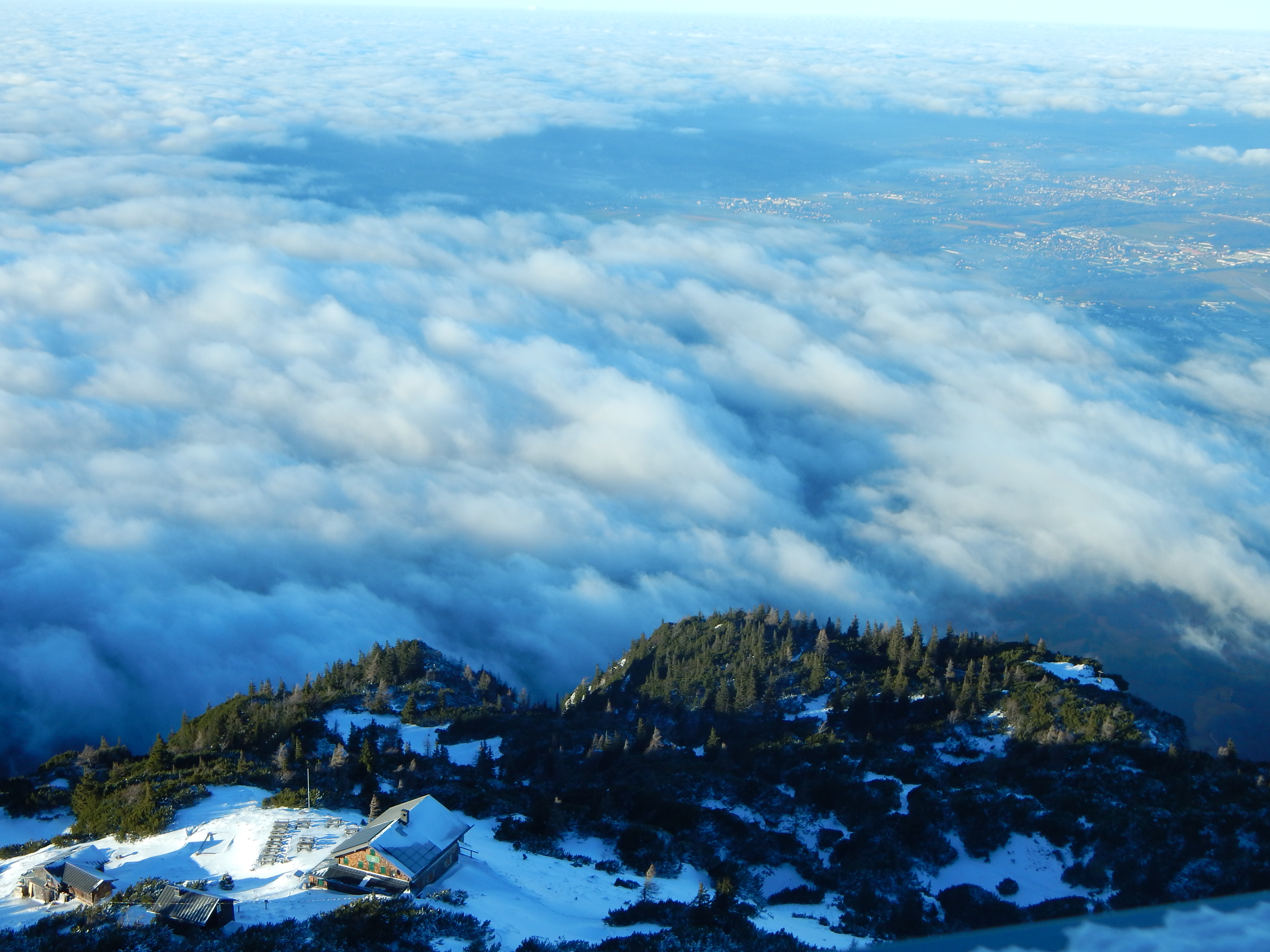 We were legitimately chilling on top of the clouds and it was breathtaking. My type of escapism. 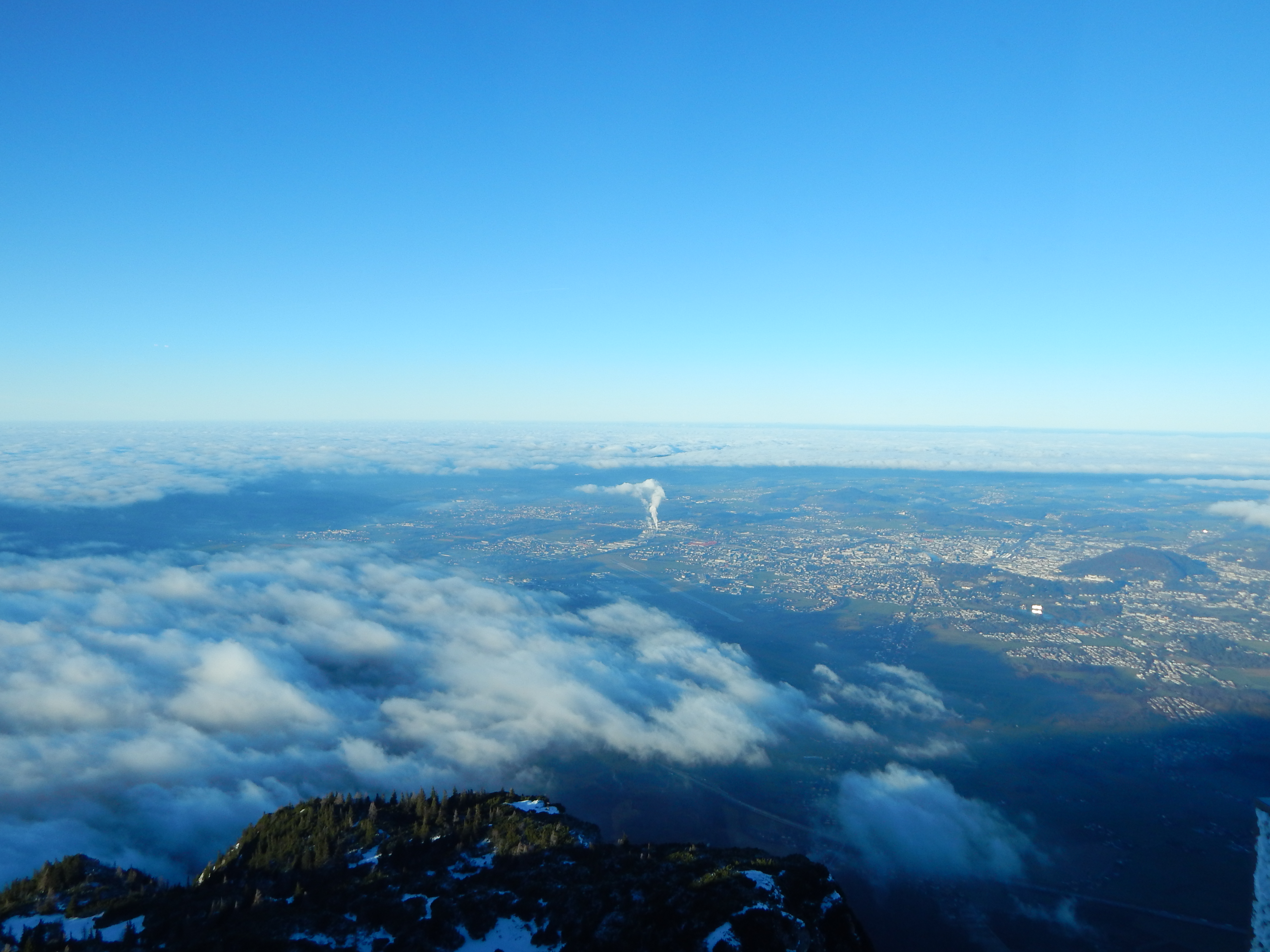 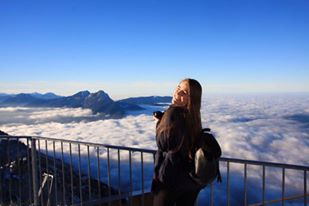 Excuse the photo quality, but look how happy I am. There was a classic log cabin at the top where, after treading through the snow and exploring, we sat for some (more) gluhwein. And I must say, I was in my element.

And then we made our was back down as the sun was setting. Hopped on a bus back to the centre and spent an evening with ice skating, going round the markets doing some last minute shopping and drinking all to much gluhwien. And took one last breath of this amazing city. As we headed back to pack and get some sleep in before having to wake up at 5am to get the plane home.

This has to be one of my favourite trips, and favourite places. It’s just so genuine and quaint. No dark sides or hidden unattractive secrets. We nearly went to Berlin to go to Christmas markets but I’m so glad we chose Salzburg. Because, just, wow.